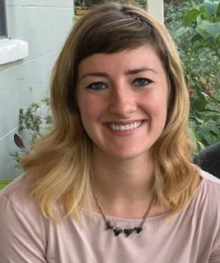 Samantha grew up in Gainesville, FL and has been involved in the performing arts in some capacity since her memories began. She has been able to explore her creativity in this city through kid produced plays, dance classes, school choruses and a tight knit and supportive group of local musicians. Samantha knows how essential the arts are in keeping people vibrant and thriving. She graduated from the University of Florida in 2009 with a bachelor’s degree in Anthropology. Since then, she has contributed vocally to several recordings (including those of Musicians in Residence Michael Claytor and Ricky Kendall) and has had the tremendous opportunity to travel all over North America and Europe numerous times on music tours. Samantha began singing for patients at UF Health Shands Arts In Medicine in August 2014 and can only hope that her singing can provide others the same healing powers it has for her.