Join UF Health Shands Arts in Medicine in celebrating the original works by Marshal Fisher. Marshal was an osteosarcoma patient at UF Health Shands Children’s Hospital from 2014-2018, and utilized art in all its forms throughout adversity. This whimsical collection demonstrates his passion for art making, and honors his legacy to inspire creativity in others. 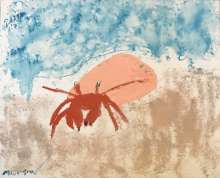 Marshal Fisher was an extraordinary child who grew to be an even more extraordinary young man. He was an artist whose imagination and creativity boosted him in the good times and sustained him through tragedy.

Marshal entered the foster care system at 18 months and, by the time he was 11 years old, he was placed 13 times – in shelter homes, foster homes, and group homes. He also attended 12 different schools during those early years.

When he approached the idea of adoption, his counselor remarked, “I wasn’t sure he would be able to trust, to open his heart, to fill the void.”

Then he found Betsy.

Betsy was Betsy Fisher, a long-time history teacher at Leon High School who, ten years earlier, realized she wanted to be a mother. She prayed for the right match, for a son that would fill the emptiness in her heart.

Betsy met Marshal and the two developed an everlasting bond. First through a mentorship and then through fostering, Betsy promised Marshal that she would always be there for him.

As Marshal’s official adoption began, Betsy wrote a letter that ended in this verse:

We are a team,

We are mother and son,

I love you Marshal,

Less than a year later, Marshal was diagnosed with cancer – a threatening bone cancer called osteosarcoma.

Marshal spent hours, days, and weeks at doctors’ offices and hospitals. He underwent surgeries, amputation of his leg, chemotherapy, and radiation. He struggled with a wheelchair and prosthetics.

Through it all, Marshal produced amazing art. He continued art classes and art therapy. “His art was all of who he was,” says Betsy. He drew with uncanny talent. He sculpted characters, animals, insects, and monsters. He decorated spoons, straws, walls, and even made a birdhouse out of one of his prosthetic legs. He used hospital syringes to squirt paint on his canvases; he built fantastic Lego creatures; he made countless puppets—out of brown bags and socks. Art was comfort, a vehicle for emotion, and a way to connect with a world that was fading from his view.

Marshal and Betsy became an Ambassador Family for the Children’s Miracle Network (CMN). Marshal created a design for Christmas cards and became a “Miracle Kid” for the FSU Dance Marathon to raise funds. He was a smiling CMN poster child.

Within a few months, Marshal’s hope dwindled; he was dying. He and Betsy talked about life and death. When he couldn’t sleep, she would ask him if he’d like her to read to him. “No,” he said, “Mom, would you draw with me?”

At the end, when they spoke of his funeral, Betsy asked Marshal about his vision and confirmed the importance of art in his life.

“I just want people to be creative, Mom,” he said. 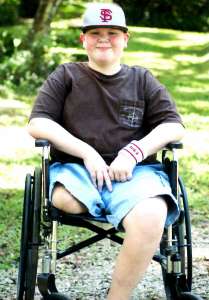